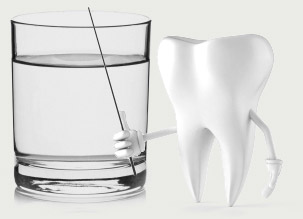 These days, it seems like what's NOT included in foods and cosmetics is nearly as important as what IS included. Items boast of being sugar-free or fat-free; containing no artificial preservatives or coloring; coming from animals that have been tested to be free of growth hormones and even packaged in BPA-free containers. Granted, too much of any of those substances may be bad for our health but why do so many toothpastes tout the fact that they are "fluoride-free?" (See "Should I be using Fluoride-Free Toothpaste?") And why are some people concerned when fluoride is added to a community's drinking water? After all, fluoride has been proven to reduce tooth decay and the Centers for Disease control calls the US water fluoridation program "one of the 10 great public health achievements of the 20th century."

The history behind fluoride and dental health

How far have we come in terms of dental health over the past century? Prior to the common use of fluoride products, extraction was about the only solution for tooth decay. In fact, one of the leading causes for rejection by the US military in World Wars I and II was if the person was lacking six opposing teeth, in order to chew with.

Then, in 1901, a dentist in Colorado Springs, CO noticed that many of his patients showed signs of what is now known as dental fluorosis (mottled, discolored or even corroded tooth enamel due, to consumption of high levels of fluoride as children before 8 years of age). Coincidentally, he also noted fewer cavities in his patients than what other communities were reporting.

A few years later, a dentist in Bauxite, Arkansas noted a similar increase in dental fluorosis -- but this time it occurred shortly after a new well was dug. This created the suspicion that "there must be something in the water." Finally, in 1930, a test of that well revealed that it contained naturally occurring fluoride at more than 13 times that of most other wells. The water in Colorado Springs was soon tested and found to also be extremely high in fluoride. Shortly thereafter, a link was established between high fluoride levels in drinking water and a lower rate of dental cavities. By 1945, communities that implemented water fluoridation programs saw a 50-70% decrease in dental cavities and toothpastes containing fluoride began appearing in the late 1950s.

The US Department of Health and Human Services has determined that fluoride levels that do not exceed 0.7 milligram per liter...

Furthermore, fluoride can not be taken into the body through the skin, so there is no concern about absorbing fluoride while taking showers, baths or swimming.

Curious as to the fluoride level in your community's drinking water? Visit the CDC's consumer resource page, My Water's Fluoride?

Are you drinking fluoridated water at your home, school or office? If so, how do you feel about it? We'd love to hear your thoughts on the subject. Please leave them in the Comments section below.

You may also be interested in: - Are fluoride toothpastes safe?
- Fluoride safety warning for tea drinkers

the fact that vermont's target levels do not exceed the 0.7 mg/L fluoride:
http://healthvermont.gov/family/dental/fluoride/documents/
guide_to_fluoride_levels_in_public_water_systems.pdf

map that illustrates how the 0.7 level is lower than what already occurs naturally in many water supplies;
ohio: http://epa.ohio.gov/Portals/28/documents/gwqcp/fluoride_factsheet.pdf
texas: page 29 of http://www.twdb.texas.gov/publications/reports/contracted_reports/doc/1004831125.pdf

CDC's statement on why they lowered recommended levels to no more than 0.7:
http://www.cdc.gov/fluoridation/fact_sheets/cwf_qa.htm

CDC recommendation that infant formulas be reconstituted, at least "some of the time" with distilled or purified water:
http://www.cdc.gov/fluoridation/safety/infant_formula.htm

Subscribe to our RSS
Information provided here should not be relied on to diagnose, treat, cure or prevent any condition, disease or illness. Please consult with your physician or health care professional for guidance on any health concern. Arkansashealth.org is a commercial website and is not affiliated with any government agency, university, or private medical center. COMPENSATION DISCLOSURE: This site may be compensated for products promoted here. Read our Privacy Policy and Terms of Use.