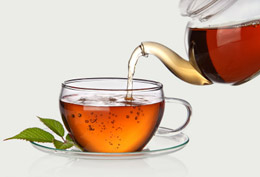 Concern over the fluoride levels in tea

Though drinking water flouridation is not without controversy, most medical researchers agree that fluoride is safe and beneficial for dental health. They also agree, however, that more is NOT better. If you go beyond the relatively low amounts of fluoride recommended by the US Department of Health and Human Services, a number of health problems (both mild and serious, temporary and permanent) can occur.

Because fluoride is one of the most common minerals on earth, present in the air (especially in areas that are polluted with industrial emissions), soil, rocks, and water, it can be found at some level in almost all foods.

Surprisingly, tea -- a food that most of us consider to be very healthy -- is one of the highest dietary sources of fluoride. (Others include gelatin, which is derived from livestock bones, and fish with soft, edible bones such as salmon and sardines. That's because 99% of ingested fluoride is stored in bones and teeth.)

The tea plant (all true tea comes from the Camellia sinensis) is especially efficient at absorbing fluoride from the soil. In addition, many tea growers use fertilizers that contain additional fluoride.

The good news is that most teas pose no fluoride threat to humans when drunk in moderation. However, because tea is the second most-consumed beverage worldwide, second only to water, many tea-drinking cultures suffer from dental fluorosis in children and skeletal fluorosis in adults. The fact is, drinking just 5 cups of tea daily puts an adult at 2 to 30 times over the Acceptable Daily Intake of fluoride. (Imagine the problem when a person drinks the equivalent of 100 bags of tea, every day for 17 years!)

Because fluoride levels in tea can vary dramatically depending on 1) the brand, 2) the age of the tea leaves when harvested and 3) how and where the tea is grown, finding a low-fluoride tea can be difficult. Fortunately, here are 5 tips for buying and brewing tea so that you can still enjoy the possible heart, anti-cancer, bone-supporting and weight management benefits of tea while limiting your fluoride intake:

1. Reach for the white tea:

2. Consider what country the tea comes from:

A paper by the Chemical Society of Ethiopia, for example, has determined that no sources of black tea from Ethiopia are safe for children and only 30% are safe for adult consumption. According to the World Health Organization, other areas generally high in fluoride include large parts of Africa, China (and northern Thailand), Middle East (Turkey, Iraq, Iran, Afghanistan, Pakistan) and Southern Asia (Sri Lanka and India). If you cross off all those options, what other countries are left?! Consider Japan, where quality control requirements may be higher.

In areas that have extremely high fluoride in their water, tea is so efficient at absorbing fluoride that the leaves can actually absorb rather than release fluoride.

The four most common types of tea -- white, green, oolong and black -- all come from the same plant. (Herbal teas may or may not include true tea leaves.) The four types differ in how they are processed: White tea comes from the buds and youngest leaves, before they are even fully open. Both white and green tea leaves are steamed, soon after picking, in order to stop polyphenol oxidation. Both oolong and black tea leaves, on the other hand, are rolled in order to break their cellular structure. They are then allowed to oxidize (referred to as the fermentation process) before drying. Black tea leaves are allowed to ferment longer than oolong leaves.

You may also be interested in: - The debate over fluoridated drinking water
- Are fluoride toothpastes safe?

Subscribe to our RSS
Information provided here should not be relied on to diagnose, treat, cure or prevent any condition, disease or illness. Please consult with your physician or health care professional for guidance on any health concern. Arkansashealth.org is a commercial website and is not affiliated with any government agency, university, or private medical center. COMPENSATION DISCLOSURE: This site may be compensated for products promoted here. Read our Privacy Policy and Terms of Use.